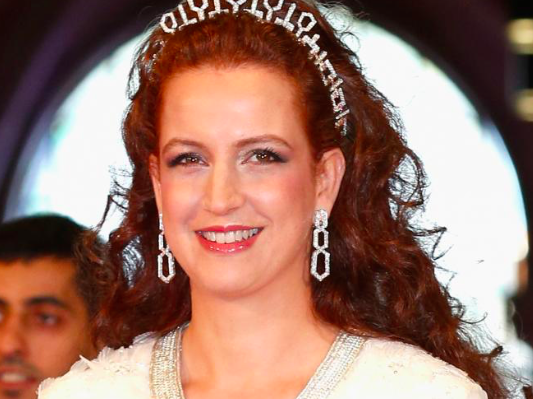 Princess Lalla Salma of Morocco, born Salma Bennani, is the first women in Morocco to have been given the official title of Her Royal Highness Princess Lalla Salma after marrying King Mohamed VI of Morocco. Although she has remained distant from the public eye, Princess Salma has been an activist in the fields of cancer research, HIV/AIDs prevention and women’s right in Morocco. Born in Fes, Princess Lalla Salma was raised by her grandmother after her mother died when Salma was 3 years old. After obtaining a degree in computer science from l’Ecole Nationale Superieure d’Informatique et d’Analyse des Systemes (ENSIAS), she worked for Omnium North Africa, Morocco’s largest private corporation. A few years later in 2002, she was married to the King. Since receiving the title of Princess, Princess Lalla Salma has kept a low profile although she is more active than her predecessors. She is an advocate for cancer prevention, founding the Lalla Salma Association against Cancer foundation and supporting several cancer prevention foundations in the country. She is the WHO Goodwill Ambassador for the promotion of prevention and cancer care, and was recently awarded the International Union against Cancer Special Representative position for their “Today’s children, tomorrow’s world” campaign. She is also involved in working on issues of AIDS prevention in Africa and women’s empowerment. In December of 2008, Princess Lalla was awarded the highest decoration in Senegal, the Grande Croix de l'Ordre national du mérité, because of her humanitarian work in Morocco and abroad.