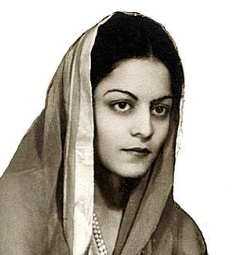 Princess Abida Sultan was the eldest daughter of Hamidullah Khan, the last Nawab of Bhopal. She was also the heiress to the throne of Bhopal. However, she renounced her rights to the throne in 1950 to become a resident of Pakistan. As a result, she was removed from the line of succession in favor of a younger sister. Her son, Shaharyar Khan, later became the Foreign Secretary of Pakistan.1 Prior to the partition of India, Princess Abida was the crown princess, president of the Minister’s Cabinet and the chief secretary.2 Bhopal, where Muslim leaders ruled over a Hindu-majority state, was handed over to the Indian government following popular protests in June 1949.3 Soon after, the princess, disgusted by the violence she had witnessed, moved to Pakistan and settled in Karachi were lived until she passed away May 11, 2002. A devout Muslim who would always interrupt an interview for prayers, she also firmly believed in secular democracy and women's rights.4 In 1965, she campaigned for Fatima Jinnah, the sister of Pakistan’s founder who was running against Pakistani president and general Ayub Khan. Although the campaign was unsuccessful, she continued to support Fatima Jinnah who she believed to be an honest person. Princess Abida was brought up by her grandmother, Sarkar Amman or Nawab Sultan Jehan Begum, the ruler of Bhopal from 1901 to 1926. Her own mother did not have anything to do with her. Sarkar Amman made sure that she received a good education that included memorizing the Quran by the age of six. 5   [1] A Bit of History: Women of History. [2] Shahryar Khan. [3] Princess Abida Sultaan: Interview Text. [4] Princess Abida Sultan. [5] Princess Abida Sultaan: Interview Text. [6] ibid.